The ballooning cost of aged care in Australia has drawn commentary from former prime minister Paul Keating. Keating believes that costs should be met by a HECS-style funding model. Under this model every senior Australian is extended a loan to pay for their care, with these costs then recovered from their estate.

Welcomed in principal by some, the model would reduce the financial burden on younger generations of Australians who will also now be carrying the Coronavirus pandemic debt.

For each senior, their assets would help to maintain them in their later life, but it would remove the ability of family members to call on those assets.

The current solutions taken by seniors of negatively mortgaging homes, or having their families pay for care or move in with family members is not always the best solution.

"We're not forcing anyone out of their home … I think such a system has a lot of advantages," Keating said.

Keating's scheme, which he put to the Royal Commission into Aged Care Quality and Assurance, is a departure from his previous position of a national insurance model employer-funded levy, similar to the superannuation scheme that he designed as treasurer. He now believes that it would be politically difficult to impose a new levy as there was already public resistance to an extra half a percentage point going to the superannuation levy.

The scheme could be a potential financial risk for the Government, but it would provide housing security for senior Australians.

"It sounds like a universal unsecured loan, and I'm not sure any government would be able to take that on," said Combined Pensioners and Superannuants Association policy manager Paul Versteege.

National Seniors Australia chief executive, John McCallum said that as current asset testing for aged care did not include the full value of the home that this was a conversation that should be reopened.

Currently, in Australia, the first $170,000 of the value of the family home is included in asset tests. There is a call for this to change to the full value of the asset. It is common practice now for seniors to help their children to purchase their first homes, and this does create an additional element to discussions over changes.

Keating dismissed the suggestion that his post-funding model could be looked at as a death tax. 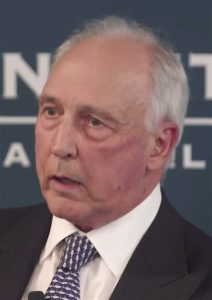 From the self-described ‘lippy suburban mother of two’ to the Dark Destroyer from TV’s The Chase, Ryman Healthcare has been recruiting a range of…