The lack of bathrooms designed to accommodate accessibility, not just in retirement villages, can largely be attributed to the assumption that accessible bathrooms must be tasteless to be functional.

“They save lives and reduce serious injury,” he said. 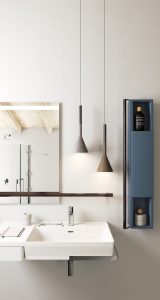 By simply incorporating rails or reinforcing walls for future installation, developers can minimise the risk of injury to residents and save money.

“Adding $20-$30 worth of extra timber to reinforce walls so rails can be installed later on can save up to $20,000 in refitments,” said Paterson. Adding rails in the bathroom also adds value to the home. 30 percent of the population has a disability of some sort, yet only two percent of homes are built to Universal Design principles. This is a massive lack of supply.

For all Northlit homes, rails are pre-installed in both the shower and toilet areas. They are not optional.

“It’s one of those things you should just have,” said Laity.

Accessible bathrooms can and should be beautiful spaces that don’t make it obvious they are designed to accommodate someone with a disability. With advancements in design, there are other options beyond the stainless-steel hospital rail.

“Village bathrooms, some look like your typical bathroom, then you see others, and they have attempted to create an accessible bathroom, but it looks like a hospital bathroom,” said Laity. 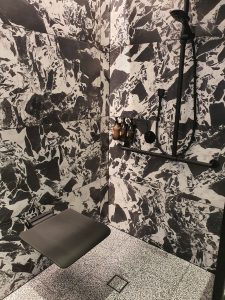 This is why Laity chose SA Plumbing’s Hewi rail system, “because they don’t look like a hospital rail.”

“The rails are sleek and come in an assortment of colours to suit any colour scheme,” Laity continued. “We generally go with the white or grey finish, but they’re not just clunky stainless steel.”

“We use the T-shower rail, so it doubles as a showerhead holder and a grab rail. The same goes for the toilet roll holder, which is also a grab rail.”

That is the most challenging part of making a house, said Laity. “Making a bathroom accessible and functional for the older community, but not making it look like it’s out of a hospital bathroom.

“The Hewi rails look tidy and not out of place.”

Paterson argued that the cost of providing fine, accessible equipment is more than outweighed by the financial and practical advantages it provides developers and the greatly enhanced experience for future resident’s that can be offered in every bathroom.

“Life is about experiences, and the goal should be equally positive for able-bodied people and disabled people.”

There are implicit and explicit takeaways from the Royal Commission’s (RC) findings. This article is an abstract of Steven Strange’s presentation (an analysis) from…