We gave it a pop! laughs Jenny Barns holding on tightly to her sister Libby's hand after swimming in the Olympics@Ryman heats at Malvina Major Retirement Village in Wellington.

The sisters who were competing for their villages – Jenny for Rita Angus in Wellington and Libby Gosse for Julia Wallace in Palmerston North, were all smiles after their races and heading off for some sustenance and another warming coffee on their way back to Jenny’s apartment at Rita Angus.

Jenny and Libby are second-generation Ryman residents. Their mum, Margaret Barns was an early resident at Rita Angus and lived there until she was 105. Margaret’s legacy was hugely influential on the sister’s competing at Olympics@Ryman. She was a sports educator, loved all sports and was hugely enthusiastic and encouraging in giving anything a go.

“If she were here, she would be running it,” laugh the siblings. “We decided, ‘come on we can do this.’ We’re doing this for dear old Marg.”

The sisters are full of praise for each other. “I’m so proud of Jenny,” said Libby.

“I’m so proud of her to do this after having heart surgery earlier this year.”

Jenny bounces back with, “Libby only moved into Julia Wallace seven weeks ago – that takes a lot more stamina!”

Libby said she and her husband Jim moved into Julia Wallace so they could go when they wanted to and enjoy being involved. She had worked in real estate for many years and saw the result of people waiting too long.

“Jim’s back at the village helping to build rat traps!” A village initiative for protecting the environment.

Libby came fourth in her race out of 15 competitors and Jenny was happy to finish. 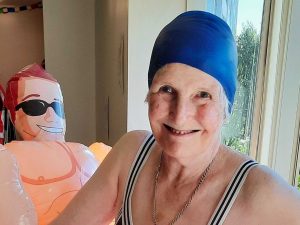 “You certainly weren’t last,” enthuses Libby. They wondered if they were the only siblings from different villages competing.

The sisters are not new to the water. They grew up in Eastbourne on the shores of Wellington harbour in a little seaside cottage.

“We would swim every day rain, hail or snow. We just went over the sea wall and in.”

“I was determined to do this for Rita Angus,” said Jen. The inspiration and competitive spirit inherited from Marg are clearly still evident.

“We’ve got to get people going and into it.”