Offering updated national recommendations to enhance older people’s nutritional health, a new report has been written by the Food Safety Authority of Ireland (FSAI) at the request of the Department of Health.

The report said it provides comprehensive food-based dietary recommendations that, as part of an overall lifestyle approach, enable people over 65 to live life optimally to their individual potential. It highlighted that over 65s need high-quality proteins to stimulate muscle protein and recommended that healthy older adults eat a more protein-dense diet consisting of foods such as meat poultry, fish, dairy, and eggs.

The report added that older adults at risk of low intake dehydration need an adequate number of drinks. Women, it said, need 1.6 litres and males 2 litres per day, however, it added that “strong tea should only be consumed between meals and not during meals, as it interferes with absorption of iron and zinc.”

Low levels of vitamin B12 is also of particular concern in older adults, added the report, as it is associated with age-related atrophic and/or use of proton pump inhibitor drugs.

Over 65s are the fastest-growing age group in Ireland, having increased to approximately 630,800 people (13.8 percent of the population), with expected ongoing increases to a predicted 1.6 million older citizens by 2051. 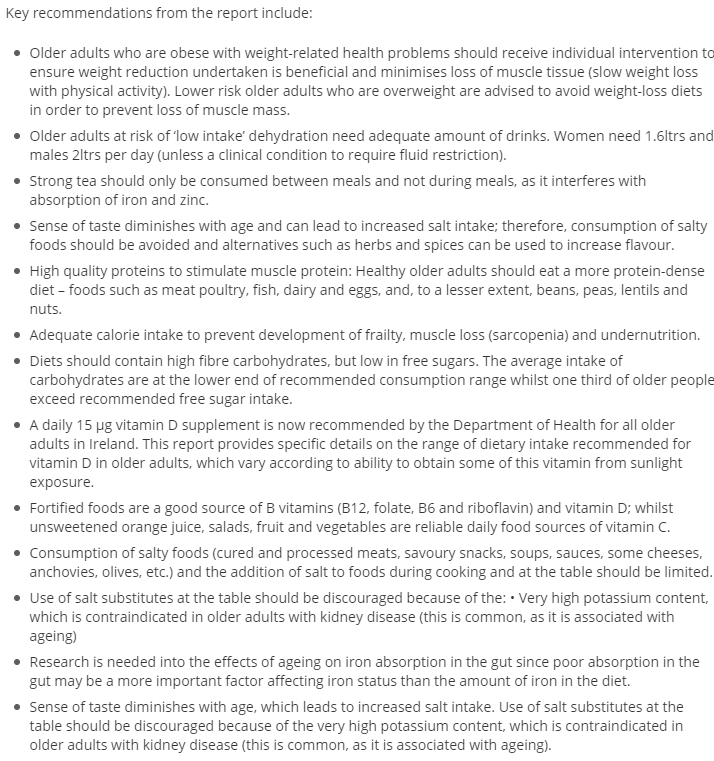 The population of over 65s is expected to reach almost 150 million in Europe by 2050 and the foods industry is keen to explore what are the specific needs of what is a rapidly expanding and often affluent consumer group. However, the number of new products launched that cater to ‘silver surfers’ and ‘baby boomers’, however, pales in comparison to NDP targeting younger consumers.

Dr Pamela Byrne, FSAI chief executive, stated that it was important to ensure robust science underpinned the development of food-based dietary guidelines that include healthy eating and nutritional recommendations tailored specifically for this group.

“This report sets out a number of science-based recommendations that will underpin national guidelines. Due to considerable variations in the ageing process, food-based dietary guidelines are best tailored to functional capacity rather than chronological age,” she said.

“People should look forward to the golden years of their third age. The preservation of muscle mass and skeletal strength are both critical to maintaining functional autonomy and independence as we get older. This report looks at the positive role nutritional intake can have in this population group to enable them to live life, and life it the full.”

Just as the hospitality and horticulture sectors are struggling with labour gaps, rest homes and elderly hospitals are full houses with not enough healthcare…