A group of Diana Isaac village residents revelled in the opportunity to show off their balance, composure and good humour during a fitness class -- hosted in front of TVNZ television cameras.

The four were under the guidance of Ryman Operations Activity and Lifestyle Coordinator Chelsea Richdale. Chelsea took Robin, Murray, Ngaire and Sandra through their various exercises at a good pace.

At the end of the session Chelsea, a former competitive skater, gave Seven Sharp some insights to staying sharp on your feet is all important for those in retirement living, or even over the age of 50.

The smiles on the residents faces lit up during Chelsea’s workout session. For one there had been a limited numbers of Triple-A classes during Level 4 lockdown, and then even at Level 2. Diana Isaac’s Triple A classes, usually hosted by Georgie Cotton in the village centre, have in recent weeks been hosted online.

Triple A (Ageless, Active and Aware) is a programme run by Ryman Healthcare throughout its 43 villages, home to 12,750 residents, in New Zealand and Victoria, Australia.

Chelsea is a big fan of fitness and staying active. She was a competitive skater from the age of eight to 22 and then spent another three years coaching others. At Ryman she oversees activities and fitness coaches and contractors such as Georgie.

Chelsea, and the residents were clearly in a ‘let’s move it’ zone while showing some regular Triple A moves. Jason took some fabulous camera footage of the impromptu session, that he sent north to Mary Jane Agate for a segment that was shown on television last night.

Chelsea says, importantly, there is no age at which you should stop trying to improve your fitness and in particular balance. In fact, you can improve your balance, say at the age of 80, by starting a series of simple exercises.

Chelsea said her ice skating background had been hugely helpful in terms of knowing how programmes like Triple A could help. She said while the majority of her training and coaching had been in her teens and 20s, it was never too late to improve your balance fitness and she regularly did such sessions.

“My background was balance training, on and off ice.

“They say supposedly when you land (on a single skate) it’s eight times your body weight on a toe pick, when you land. So it’s a lot,” Chelsea said.

“Now what I find is, if I practise my balance for a week, it’s back.

“If you just continually practise it, you don’t lose it – is the key thing. I think that’s what we try and get across to the residents. It doesn’t matter if you don’t do it for 10 years, if you do start doing it, it will rebuild up and it will still be amazing.” 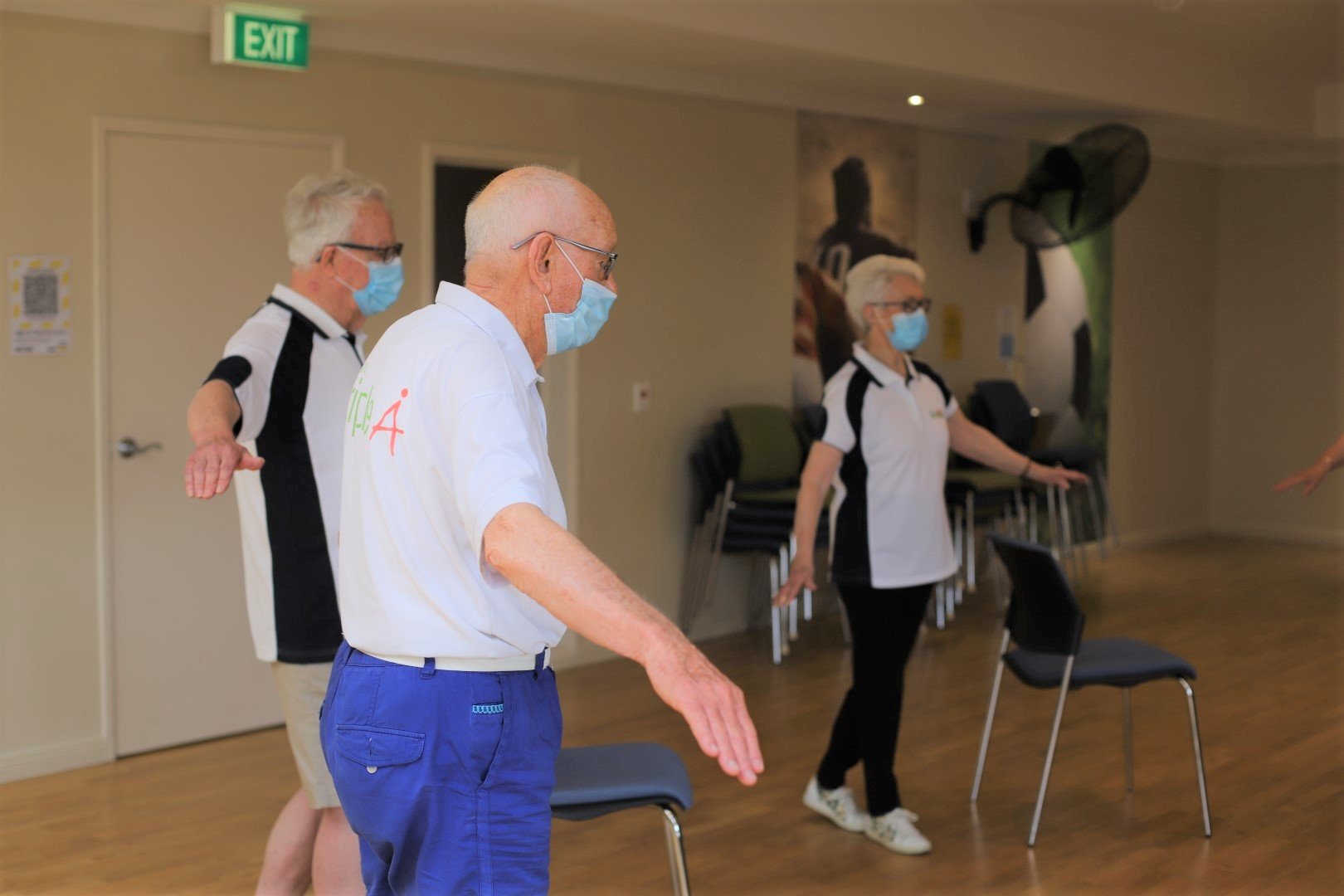 Chelsea said in terms of the types of exercises, Triple A often concentrated on a four-point balance test – which has different levels and includes some changes in configuration of a person’s foot stances, including feet together, one foot within the other’s instep, one behind the other, then balancing on one foot. At each stance a resident would hold their position for about 10 seconds. “Our residents here at Diana Isaac have pretty darn good balance… so they can go from doing knee-lifts with kicks to lifting up, without having to stop.”

Diana Isaac village Manager Tracey McCullough says she too is aware of balance, having been a long-time member of a marching group, where turns and holding positions are common.

Tracey said the Diana Isaac village team was proud of the high numbers of residents attending Triple A – held during different sessions, five days a week.

During the COVID lockdown restrictions, there had been regular Triple A Zoom session, hosted over residents’ PCs and laptop screens.  During that time there had also been a noticeable increase in the number of people walking and cycling around the village to keep up their fitness.

With Christchurch now adhering to Level 2 rules, smaller groups of residents have been able to move back into the defined village centre classes areas, and exercise without their masks on in front of a contractor. These same classes available to individuals or couples via Zoom at the same time.

Here is the link to Seven Sharp interview

Aiming to discover how our diet may impact immune response, a New Zealand Covid vaccine study is underway in Rotorua and Christchurch, observing New…